En route to Intelligent Enterprise, NTT DATA Business Solutions was our constant companion during the conversion to SAP S/4HANA. We were immediately persuaded by the outstanding industry and SAP expertise. After twelve months, we had reached our goal. Now, our processes are both future-proof and ready for innovation. 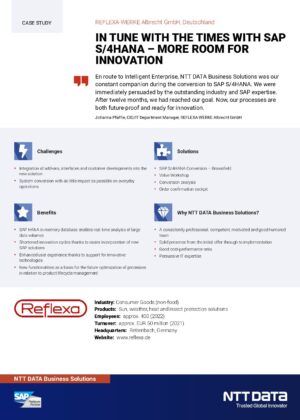 Building the business processes of tomorrow

Vista, now known as Reflexa, started production of blinds back in 1961. In addition to display cases, curtain rails and folding doors, the company sold a great many other products, including the tandem bicycle. Over time, the company switched focus to sun, weather, heat and insect protection products. With more than 300 employees, Reflexa is now one of the foremost full-range suppliers of sun-protection technology in Germany and has established itself as a specialist for patented asymmetrical shading technology. Reflexa remains a family-owned business and, as an independent company, is a reliable partner for all market participants who wish to continue their dynamic growth. Growth, however, is accompanied by a need to shape the IT strategy to meet the needs of the future. All of this takes place under the motto of freeing yourself from old burdens, and thus of the longstanding SAP ERP system, so as to put new innovations within reach.

SAP S/4HANA is the answer when it comes to state-of-the-art, innovative business processes. The IT department often works on multiple projects in parallel, which represents a major hurdle to switching to a new solution. As a consequence, so many employees were already occupied that the capacities needed for the conversion were scarce. Reflexa found those capacities in NTT DATA Business Solutions (NTT DATA). Preferring to adopt previous processes partly 1:1, as well as to optimize them within the framework of the project schedule and to book some quick wins, the future solution was introduced in a Brownfield scenario. While the Greenfield approach entails the reinstallation of the SAP system along best-practice lines, and thus a restructuring of business processes from the ground up, the Brownfield approach is a purely technical conversion of the existing system. A big picture of the future system landscape, an accurate roadmap and sufficient buffer time for the implementation are the foundation for a successful ERP migration.

A high-performance system for a state-of-the-art company

In order to produce a detailed outline of the changes that needed to be made, the existing system was subjected toa technical review. As part of the Extended Custom Code Checks, all applications, including custom developments, were checked for compatibility with SAP S/4HANA to identify those program areas that needed to be adapted. A value workshop and conversion analysis were then carried out to provide insight into possible opportunities and challenges. With SAP S/4HANA, Reflexa is well on its way to becoming an Intelligent Enterprise, thus ensuring the optimization of existing processes. In addition to reduced innovation cycles by facilitating the introduction of new solutions, Reflexa has also gained new real-time analysis with the in-memory SAP HANA database, a basis for future digitalization projects.

Reflexa has found a competent, eye-level partner in NTT DATA, a partner who understands the industry and the company’s needs and has succeeded in implementing them within twelve months. The sooner companies begin planning and converting to SAP S/4HANA, the sooner they can start to enjoy the benefits. After all, once maintenance for an existing system solution expires, errors and vulnerabilities will cease to be rectified by updates, thus elevating the risks to system operation. The switch to the new ERP suite has been a major boost to company digitalization. As a result, Reflexa is now able to take advantage of digital, automated and simplified operational processes instead of largely manual data transfers, which are always prone to error.

Thanks to the managed cloud services of NTT DATA Business Solutions, Patrizia now benefits from a secure system environment, high-performance business processes and additional relief for IT.

Within nine months, Elektro-Material AG converted its previous financial solution to the new cloud as part of a best-of-breed approach. The company benefits from simplified, automated, accelerated and fully digitalized processes.