From the implementation of GUEPARDO, we were able to start procedures and activities that were previously done according to demand or urgency, reducing the fiscal closing by approximately 1.5 working days.

Cia. Hering is a multi-brand organization present in the lives of Brazilians for over a century. Through three brands, Hering, Hering Kids and DZARM, it dresses its consumers by delivering innovative solutions allied to technology, both in the product and at the selling point, aiming to provide the best shopping experience to customers in all the channels it operates: its own stores, franchises, multi-brand retail and e-commerce. 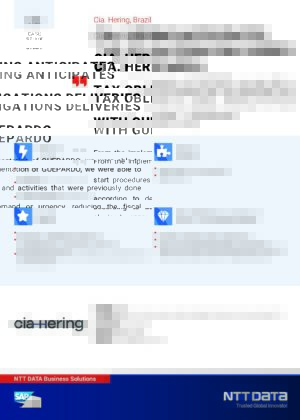 Download the file and discover how the use of NTT DATA's tax tool was able to revolutionize one of the largest Brazilian fashion e-commerce, optimizing its tax routine, in addition to ensuring tax governance, compliance and increased productivity!

When looking for a tax software that could meet the speed requirements and simplify the process of calculation of tax obligations, Cia. Hering found NTT DATA Business Solutions Brazil’s GUEPARDO Tax Software.

Needing a tax solution that could meet the tax governance and compliance requirements, the GUEPARDO tax software was chosen for its excellence in delivering the obligations to the Tax Authorities after a functionalities evaluation based on the problems faced by Cia. Hering. It was necessary to implement a solution that would allow a managerial vision of the processes, besides optimizing the tax accounting routine and eliminating rework. This was because the company worked with several separate systems, including manual calculations in Excel spreadsheets, which consumed a lot of time and energy, since the obligations were always delivered on the last days of the deadline, and most of the time, it was necessary to rectify the deliveries.

Since the project was contracted by Cia. Hering, the planning already started to be executed with an agreement of dates and activities, which allowed partial deliveries according to the needs of the obligations, adding value throughout the implementation, and not only at the end.
The project lasted 11 months, and was started in February/19 with the first delivery in May of PIS and COFINS, in October ICMS, November LC116 and in December Retidos, Bloco K and Bloco H. REINF had already been implemented in 2017. The synergy between the teams and the dedication were also key factors for this project to be considered a Success Case.

With the GUEPARDO Tax Software, Cia. Hering eliminated manual entries, integrated the information in the same base and made the calculations and deliveries to the Tax Authorities more practical, fast and reliable, besides the increase of the information security level. Other benefits that cannot be left unmentioned are the anticipation of the EFD delivery by approximately 30 days, the reduction in the execution time of the ECD and ECF (previously the calculation took about one and a half to two months, and today it is possible to do it in one week), and the reduction of 1.5 working days in the accounting closing. The search for compliance is constant, and continuous improvement is part of the company’s DNA. Therefore, new implementations are being studied for the near future.