Kommunekemi is a company with a turnover of 325 million (2007 numbers) that treats around 175.000 tons of hazardous waste every year. The company was established in the early 1970’s, when the government issued a general injunction to all Danish municipalities regarding the establishment
of stations to receive hazardous waste. 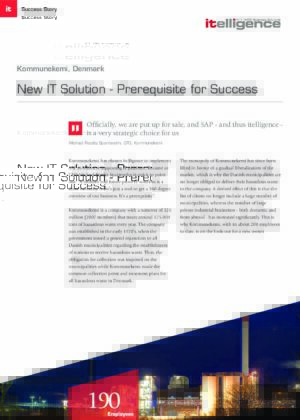 New IT Solution - Prerequisite for Success
Download the Success Story

Kommunekemi has chosen NTT DATA Business Solutions to implement SAP as business supporting IT platform. Because as CFO Michael Reedtz Sparrevohn is quick to point out: ”A modern and future-proof IT solution is a sheer necessity. It isn’t just a tool to get a 360 degree overview of our business. It’s a prerequisite”.

The 77 people with budget responsibility are working in a system that is as user-friendly as Excel; “behind the scenes” the data is linked intelligently and automatically. This means that SEAS-NVE can budget much more on the activities that drive them.

Automatic handling of expense invoices is one of the enterprise advantages of the shared service center in the accounts payable operation of the giant retailer JYSK. The solution behind “e-invoicing” is called it.approval. The SAP partner is NTT DATA Business Solutions.